A downloadable QamaQ for Windows, macOS, and Linux

Live the ascension from human to demi-god. Use ancient powers to eliminate your enemies and restore peace to your realm. Hit demon monkeys with a stick (yes ! ).

QamaQ is a game made during a student project at the school of Rubika Supinfogame, France.

We were a team of 7 people, and we had to do a top-down 2d pixel-art game : We opted for an action/adventure one, with a great emphase on action. We tried to make a short and simple experience, yet well-polished.

You are playing as Iwka, a young monk living in an Precolombian inspirated world who is now the container of the Yamt'a, the purest form of energy, the one which is possessed only by the ancient gods.

This energy was spread around the world, creating chaos because of it's bad usage by wild creatures, turned crazy by their own power, newly acquired.

You have to harvest it now, by defeating them, with the help of 4 competences, principal powers of the gods themselves.

QamaQ is playable with Keyboard and Mouse. The Mouse gives the position to attack.

Run faster ! Useful too,  for fleeing  as for rushing !

Attack on the cursor's direction. You can do a combo by attacking 4 times in a row, doing a more powerful attack.

Keys to use the competences. There's 3 slots for 4 competences  :  Choose your favorite roster.

Skip the cinematic, or the dialog. Be careful with this one !

Overall,  we would have liked to put more adventure into the action, like enigmas or level elements which coulda have been interactive with the powers, or different small quests... But we chose to really concentrate on the action and the feedbacks ! So I hope you'll have fun !

Download, extract, execute. As simple as any grand priest prophecy ! (ok, that might be a bit cringey).

its really great game but its too short. btw, what is the system recomended for this game?

hope you enjoy it!
Reply
djuloh4 years ago

Thanks for playing ! Saw the video, I cringed at some terrible language faults ("hitted" ? Seriously me ?) in the game's text, whoopsie doopsie...

Well, for the system, I'm not really sure : for our test, we nearly all had very correct laptops, with intel core i5, and nvidia GTX graphic cards (never tested the game on another composition than intel proc-nvidia gc) . Personnally, with a GTX950M, it runs smoothly. On a classic iMac, it went well too, with max graphs. It's not near well optimized,  so in theory in Medium or Low it could run on a toaster, but again it's no certitude.

its a okay for me about those faults cause this is action game :D maybe other will notice it (i dont notice actually :D)

its okay i just want to know cause i got some lag in the video. thanks for checking my video :D

Well first of all the game looked beautiful, good job. The action was cool, although I had sometimes a problem with feedback(made random dashes while attacking, sometimes stunned). I also really liked how you could counte monkey attacks and whished for the bugs and hounds there would be something similiar.

I had also a small bug, that after dying to the boss, I respawned and still had the boss hp up there. But over all a nice short experience.

If you attack the hound while he's attacking, he's knocked out even longer than the monkey. It's an enemy a li'l tougher, so the delay to knoch him out isn't enormous, and I can fairly understand that as the battlefield can be a total mayhem it can be hard to analyze precisely the enemies move, knock em down at the right time, then use an ability with a count timing and stuff like that. Same for the dash coming after 3 base attacks in a row.

But if you had a good time overall, that's okay for me ! Thanks for the feedback m8 !

First off, the artwork is downright beautiful. the high-res pixel art and how coloful and detailed it all is is just a feast for the eyes. There ended up being a lot more dialogue in the game than I was expecting, which isn't necessarily a bad thing, but it did eat up a sizable chunk of the playtime and there were a few translation errors, most of which looked like improper synonyms. But hey, I speak no French, so who am I to criticize your English? My only real complaint was that the combat was a little frustrating but it's hard to pin down just why. I think it had to do with the short attack range, the sheer number of enemies and the dash on the third swing of the combo. It never quite felt like I was completely in control of my character and like I got hit way more often than I should have. The abilities and health regen for kills made up a lot of ground in the overall feeling, but it still was a little more frustrating than fun. Overall, it's still impressive work and not bad by any means, just trying to give a little feedback :)

Haha, thank you for the feedback. Yep, I ended up doing the traduction a li'l quickly, and it must have been alot of errors in it. I'm gonna reread myself and correct it.

As for the fight, I agree ; it's a feedback that we had alot. I'm not sure if i'll rework it, even if I want to, but it's have been a long time since I worked on the project and as I was not a main programmer I wouldn't like to disturb my pals, who have now other stuff to do too.

The wound cooldown is indeed the most frustrating thing, and it's punishing for being not careful : We had to respect intentions, and to really 'force' the player to use them so we can say 'hey the powers are essential as we said in our game document right'  (even if that's a bad way, I know :'(   ) . Therefore there's some things that we couldn't indicate inside the game, like you can hit the Boss and it's hands when they're down with every abilities, you can hit with the stick inside the shield, etc etc. , stuff that's useful to the player for doing a better fight and preventing himself from being assaulted and hit by every mobs :P

Do you think that would be worth to put maybe a read me, or spend some time working on some visual feedbacks to indicate that ? Could that compensate the wound and base fight problems ?

Thank you for the feedback and for playing anyways !  :D

What's you're doing is really cool, I already saw you play my pal's game Aube and a bunch of other student/indie games, and that's really cool of you

If the intention of the combat is to force the player into using abilities, you've done that quite well! Maybe just adding an "F" keybinding for the last ability could add that tiny bit more of having all four abilities. I know I was quite harsh on a lot of the little mechanics and the overall game feel, but all of that comes from having no idea of what the developer intentions are. If the standard combat is meant just to be a way to keep enemies off you until your cooldowns are finished, it works pretty well. But having a short directional dash bound to space or something could have done a bit to mitigate that feeling of a lack of control.

I know most student projects don't get updated after release due to how busy students are, so no worries on that front. For students, most of my feedback is just so they have a rough idea of what an end user might think when playing so they can take that information forward into their next project. 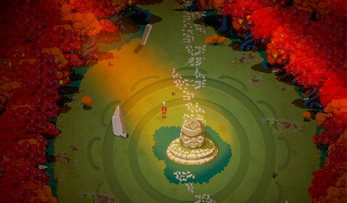 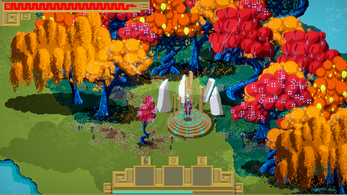 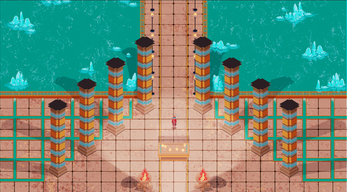 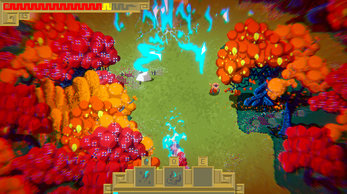 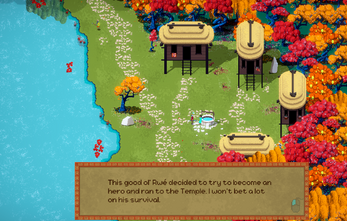